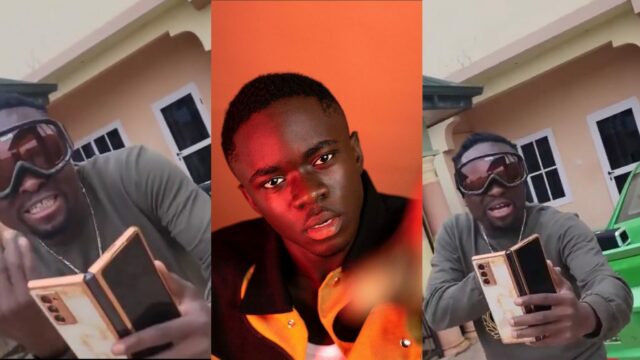 When we say Bro Sammy is not your ordinary kind of Gospel musician, this video here adds a layer of definition to this assertion.

In this video shared by blogger Sammy Kay, the Nation’s Worshipper as Brother Sammy is affectionately called, is seen wearing Goggles and spitting heavy bars as a rapper in what appears to be a remix of the aforementioned song with a touch of Gospel.

His demenaour in the video does more to deepen the conversation that has since erupted online since the footage was shared on the internet.

A few days ago, Brother Sammy has come through with his trademark sense of humour along with dust of his controversiality sprinkled on a new statement he issued in a fresh interview.

In an interview on the mid-morning show on Rainbow Radio 87.5FM that he once sold bread and groundnut paste which was a direction induced by the Holy Spirit (God)

Brother Sammy told the host of the show Sokoohemaa Kukua that during his difficult days in Berekum he sold bread to keep his body and soul together but business was not booming.

He said unable to cope, he asked God for direction after which he revealed himself to him through a dream and asked him to add groundnut paste to his merchandise.

He said when he applied what he was told, his business shot up exponentially and he made a lot of money which was soon replicated by his competitors in Kumasi.

“I was selling the bread on a commission basis, but business was slow. So one day, I cried and provoked God and asked him to speak into my business.”

“In my sleep, I heard his voice telling me to add groundnut paste to the bread. I did as he directed. I became a popular bread seller in Kumasi until other bread sellers adapted to my approach,” he narrated.