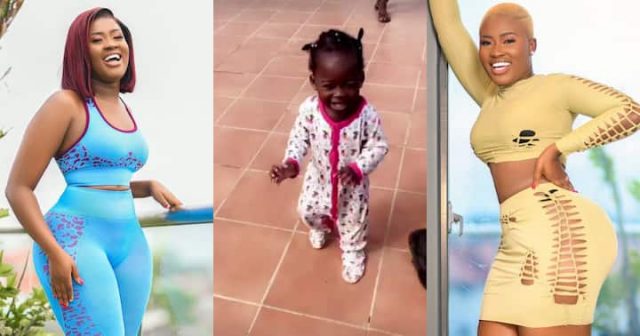 Island Frimpong, often known as Baby Island, is the daughter of actress Fella Makafui and rapper Medikal. She is rapidly maturing into a large girl.

The one-year-old is now old enough to be able to greet her mother when she returns home after being gone for many days.

Baby Island was seen on one of her greeting chores in the most recent video from Fella and Medikal’s residence.

Island’s mother just returned from a trip to Dubai. On the morning of December 3, 2021, she returned to Ghana.

Fella’s daughter came out to greet her when she returned home and gave her a warm welcome.

Island is seen clad in jammies and racing around their compound to see her mother in a video Fella uploaded on her Instagram stories. As she shouted’maa,’ the small girl grinned with delight. However, she was hampered by the presence of some dogs in the residence.

Island’s sprint towards the mother was successful only after Fella yelled at the dogs to clear the path. Baby Island rushed straight to her mother, who was yelling in delight, after clearing the dogs. Island was later spotted seated on a couch in the main area, playing with her mother.

ALSO READ:   "I Was So Drunk That I Didn't See Fella Falling On Our Wedding Day" - Medikal (Video)