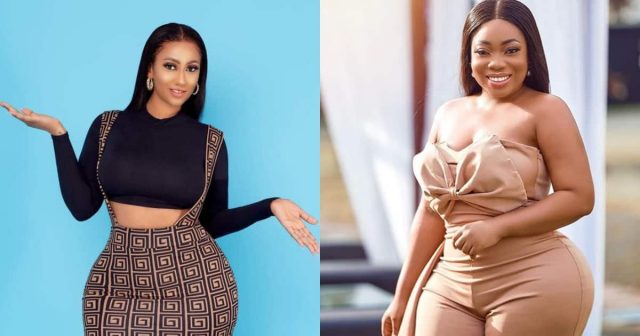 Repented Ghanaian slay queen and actress Moesha Boduong has reached to her friend, Hajia4Reall to send a message given to her by God.

Moesha Boduong who has become an evangelist of God after dumping her old lifestyle which includes sleeping with married men for money and hooking up young girls to big men for money and others has been testifying of God’s goodness towards her since giving her life to Christ.

Reacting to a recent post Hajia4Reall made on her Instagram page where she posted a photo of her and entreated her fans to subscribe to her songs and use them as ringtones on their phone as she reminds them of the fact that we are in the month of love.

Moesha expressed her love for Hajia’s songs and urged her to soar higher with her music after jumping on the music scene barely two years ago.

According to Moesha, Hajia’s ‘Fine Girl’ song is her favourite and believes she will go far with that song. She urged Hajia to keep loving God and put Him first in everything she does.