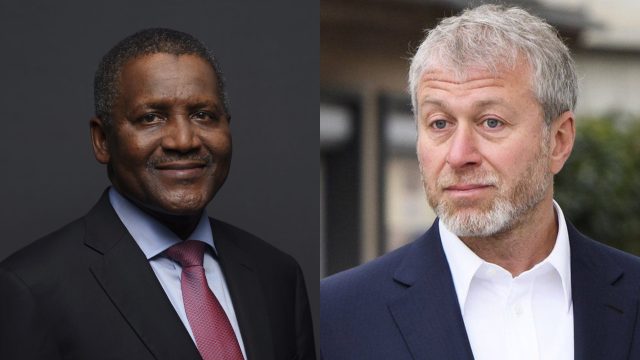 Since the beginning of 2022, Dangote’s fortune has increased by $950 million, bringing his total worth to $20 billion.

According to Bloomberg’s most recent ranking Of the world’s 500 wealthiest people, Abramovich is currently ranked 124th.

Dangote is a noted Arsenal supporter who has shown an interest in purchasing the club, which is presently owned by Kroenke Sports & Entertainment.

The Nigerian is the creator and executive chairman of the Dangote Group, which manufactures Dangote Cement and other African goods.

In addition, when finished, the Dangote Refinery is planned to be one of the world’s largest oil refineries.

The industrialist declared his plan to buy Premier League team Arsenal in a 2020 interview with Bloomberg.

“It’s a team that, yeah, I’d like to purchase someday,” he remarked at the time, “but what I keep saying today is that we have 20 billion dollars’ worth of projects, and I believe that’s really what I want to focus on.”

“I’m aiming to complete growing the firm, and then we’ll see what happens after that, maybe in 2021… I’m not purchasing Arsenal right now; I’ll purchase it once I’ve completed all of these initiatives because I’m trying to push the firm to the next level.

It’s unclear whether Dangote will make another bid for the English team in the near future.