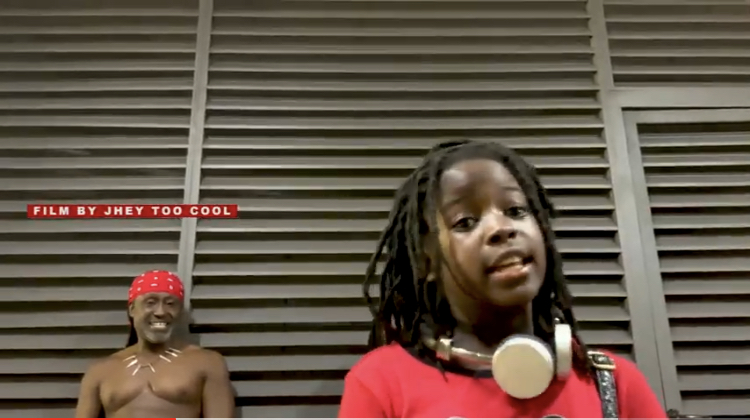 Isn’t it ‘sexy’ how Grandpapa Reggie Rockstone keeps his consistency in the game even after 2 decades? It’s extremely plausible how he fits into every new generation, genre and style with his flows, bars and versatility. The “element of surprise” you can call him. Just when one would think he wouldn’t touch the microphone again then boom, he comes up with something crazier than the previous!

11:11 is rumoured to be Reggie Rockstone’s upcoming compilation and the first record to feature all new acts. The compilation is with artistes he personally handpicked. His connect with MOJEESTONE is a genial blend; indeed, shows Grandpapa’s love and respect for the young ones, plus his willingness to work with them always.MOJEESTONE is on YouTube and it is an animation in his likeness and he tells stories and funny ones too! Satire and social commentary

The legendary rapper finally released his version of Pappy Kojo’s “Balance” hit song titled “New Balance”. After the long tease on social media and anticipation, this new Rockstone is worth the wait. In this new freestyle, the evergreen looking veteran rapper accentuates his long reign in the music industry and “nobody fi to take his spot” with a very lit video to compliment.

With these, one may come to know that the ever fresh Reggie with his achievements has actually kept him relevant in the industry and can conclude that without Reggie, there’s no meaning to hiplife genre. Talking of his fitness, he seeks to be more engrossed in keeping up health.

Reggie Rockstone known in real life as Reginald Yaw Asante Ossei, “the Godfather of Hiplife” is a Ghanaian rapper, producers do entrepreneur. He pioneered the Hip-Life movement in 1994 and also a member of the VVIP Group since 2014.

His idea that was merging the hip hop beats with authentic phat production and lace it with true African dialect; The Akan language of Twi which became the tool to make such butter classics as “Sweetie, Sweetie”, “Tsoo Boi”, “Nightlife in Accra” and “Agoo” from his debut album in 1997 entitled “Makaa! Maka!”. Launched on an independent label called KASSA RECORDS that he partly owns, Reggie Rockstone was able to reach Ghanaians and non-Ghanaians across four continents with this creative idea.

Reggie Rockstone is credited as the pioneer of hiplife or Kasahara music in Ghana and like some masters of the art of hip hop, he has proclaimed his retirement and out of retirement several times. His specialty in Asante Twi and is incredibly well versed in English too. He is internationally acclaimed, with several performances throughout West Africa, the UK, France, USA and Switzerland.