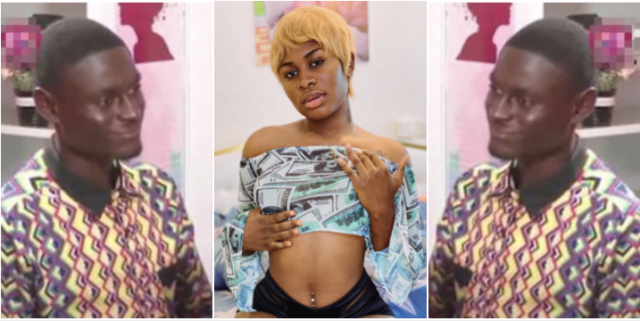 Ghanaians have been perplexed as to why Yaa Jackson, a formerly cool youngster, has transformed into a social media freak, posting crazy and exposing videos of herself.

And now, in an interview, Yaa Jackson’s brother, Jackson K. Nyame ‘Sherif,’ has disclosed some profound truths about his sister, particularly regarding her connection with God.

In the interview, he stated unequivocally that Yaa Jackson’s soul is not with God and has been linked to the devil, which explains her social media antics.

Jackson Nyame stated that despite her sister’s distance from God, he communicates God’s message with her. Although Yaa Konadu Jackson’s soul is not with God, the former movie star informed the presenter that she wants to repent.

Among other things, Nyame stated that Yaa Jackosn wants to repent following a dream she experienced, which the brother described as the scariest of all.

Meanwhile, Controversial Ghanaian comedienne, Afia Schwarzenegger has disclosed that she is giving her life to Christ.

Afia Schwar said she is moving on from all petty squabbles she has with other media personalities.

Her reason? She claims she has found Christ; therefore, she is going to live a different lifestyle.