Home ENTERTAINMENT NEWS “Who Did This?” – Shatta Wale Asks After Chancing On A Horrible... 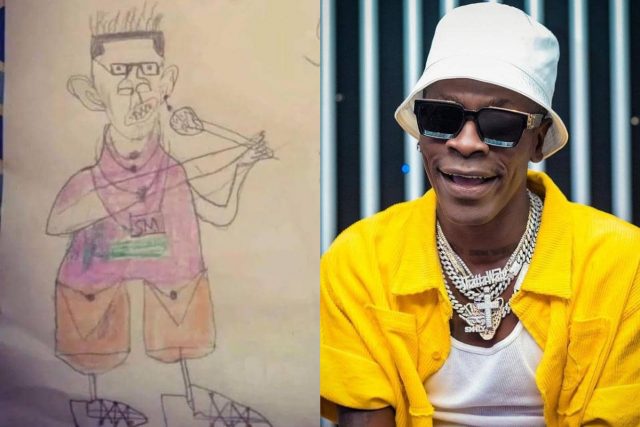 Self-acclaimed dancehall king, Shatta Wale, is looking for the individual who humiliated him by painting him as his favorite musician and demanding who did it.

Shatta Wale posted the image on his Instagram page, asking who did it and, while the entire drawing appears to be amusing to him, he wanted to know who did it to him by producing such an awful drawing of him and sharing it on social media.

The image’s caption reads, “Draw and color your favorite musician,” implying that Shatta Wale is the preferred singer of whoever drew such a terrifying drawing of him with others standing behind him.

Clemento Suarez, according to Abena Korkor, is the one who created it since he has been making fun of his colleagues and virtually everyone in his circle, whilst some netizens just respond with laughing emojis, demonstrating how ridiculous Shatta Wale looks in the painting.

The person who created such a picture made the identification so simple by writing SM on the drawing to show that his favorite musician is Shatta Wale, but the drawing didn’t fit him at all, and despite all of that, the person tried his/her hardest, but it wasn’t enough.

Shatta Wale might have criticized the person who did this to him in the past, but it appears that he has matured as he responded with a smiling emoji while inquiring who did it.

ALSO READ:   I changed the name Bandana because it was local - Shatta Wale.