Home ENTERTAINMENT NEWS AMG Armani Goes Silent For A While After Being Asked To Prove... 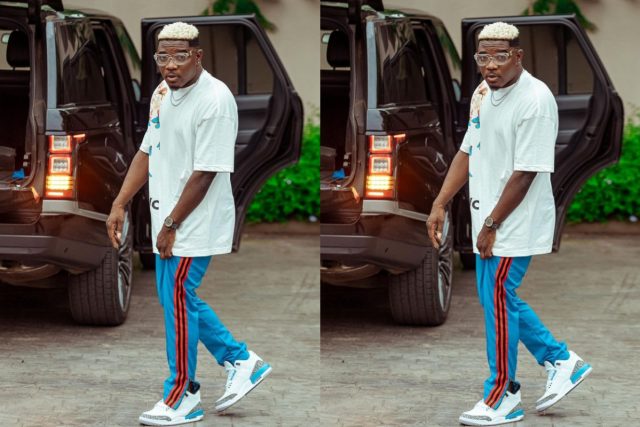 AMG Armani, the Ghanaian musician and ‘businessman,’ was trapped in a tight place at the Hitz FM studios today.

The aspiring rapper was in the studio to showcase his music, but he fell short when the host’s questioning turned to personal matters.

When Andy Dosty asked AMG Armani what he did outside of music, the rapper struggled to find the right words to describe himself.

“What do you do?” is a basic inquiry. It took a long time for the musician to respond.

When asked what type of business he conducts, the ‘It’s Allowed’ singer couldn’t say since he was tongue-tied.

When the presenter pressed the singer further, he stated that he buys and sells things such as cars, computers, and other items that generate revenue, but he could not specify how he makes his money.

AMG Armani is one of the few wealthy entertainers whose sources of income have been questioned.

Medikal, Criss Waddle, Dee Moneey, and others have been labeled as scammers for flaunting large sums of money online.

Many people feel they are involved in criminal activities and are hiding it behind their entertainment profession.

Despite the fact that they have often said that they do not participate in fraudulent activities, Ghanaians feel they are lying since they utilize phrases like Browse, Confirm, Bank Alert, Transfer, and Client, which are common scammer buzzwords.

Later in the conversation, AMG revealed that this is the attitude of the ordinary Ghanaian since it is unfathomable to see young guys becoming wealthy in society.