Home ENTERTAINMENT NEWS “Shatta Wale Has Been Ignoring My Calls for Two Weeks Now, My... 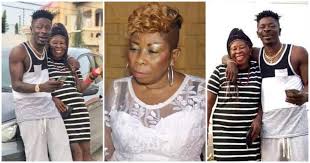 Shatta Wale’s mother sobs and claims her “BP has gone high” because of her son’s homelessness.

Mama Elsie Evelyn Avemegah, the mother of Ghanaian dancehall superstar Shatta Wale, has broken down in tears during a live radio interview about her homelessness.

Mama Elsie Avemagah, also known as Shatta Mama, claims that life has been miserable since she was removed from her home.

She has been sleeping in her car for days, claiming that the lack of sleep is causing her migraines and high blood pressure.

“Only God knows. I don’t want to mention it, but I’ve been sleeping in my car for the past four days.” While crying on the Anopa Bofo show, she remarked, “I don’t know who will want to buy my automobile.”

Shatta Mama reportedly appealed to the public for help in paying her rent after being evicted from the property Shatta Wale supposedly bought for her on February 28, 2022.

“She informed me that I had been evicted from the East Legon flat that Shatta Wale had rented for me.” I’ve been without a place to stay for about two weeks. I’m currently without a house. All attempts to contact Shatta Wale to resolve the landlady’s claims I owe have failed. “

She said that she was given the property “six years” ago and that no one came to evict her until lately, when a lady came to evict her, claiming that she owned the house but that “all efforts to locate my son have been unsuccessful.”