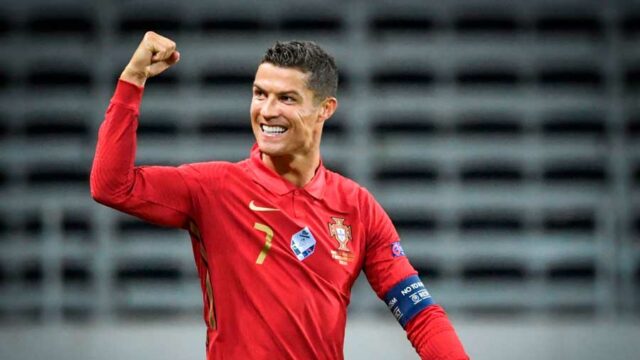 Cristiano Ronaldo, a Portuguese great, has received a perfect score in a list that includes other legends such as Ferenc Puskas, Pele, Diego Maradona, Ronaldo de Lima, and adversary Lionel Messi.

READ ALSO 👉  Cristiano Ronaldo’s Girlfriend, Georgina Rodriguez Gets Him A New Car Worth £150k To Celebrate His 37th Birthday

Ronaldo has 674 goals in 897 club appearances across all competitions, but his everlasting adversary Lionel Messi is ahead of him in terms of games played, scoring 683 times in 811 appearances.

In terms of club trophies, the Barcelona legend has 35 to Ronaldo’s 30, despite the fact that CR7 has an additional Champions League victory and league trophies in three nations.
On the international stage, the Portuguese striker is well ahead of his everlasting nemesis, with 111 goals for his country compared to Messi’s 76.

Both Ronaldo and Argentina’s Messi have won their continent’s major tournaments, with Ronaldo winning Euro 2016 and Argentina winning the Copa America earlier this summer, allowing Messi to break his duck.