Home ENTERTAINMENT NEWS Medikal And Wife Warm Hearts As They Dance On The Streets Of... 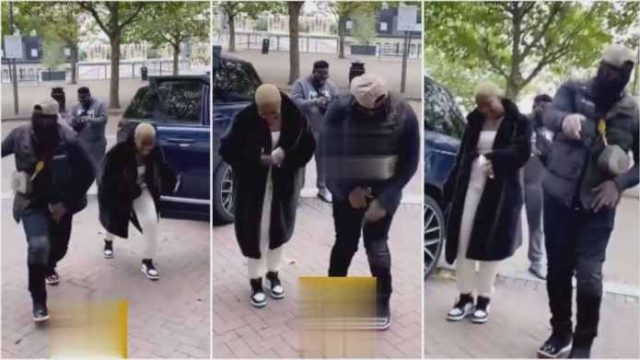 Medikal, the Ghanaian rapper, and his lovely wife, Fella Makafui, are a picture-perfect couple everywhere they go.

With a charming public display of devotion for one other, they are always giving off the couple goals vibe.

Many people are raving about their love for each other after seeing a new video of the pair overwhelming Ghanaians with sweetness.

The pair, who are presently in the UK, were seen amusing members of their team with their dancing routines in a video seen by Dklassgh on Instagram.

What began as a pleasant dance competition pitting Medikal against his wife, Fella Makafui, suddenly turned into a dance fight.

ALSO READ:   Reason Why I Said I Was Not Broke - Beverly Afaglo Clarifies

As a consequence, the two took turns on the dance floor to see who could dance better.

On the dancefloor, the husband and wife gave it their best, drawing applause from onlookers and members of their team.

Medikal was the first to take to the dancing, but before he could show off his ‘killing skills,’ Fella Makafui intervened and demonstrated her own.

Later, Medikal was given the opportunity to demonstrate his abilities, only for Fella to flip the dance fight on its head, turning it into a formation dance sequence as she imitated her husband’s skills.