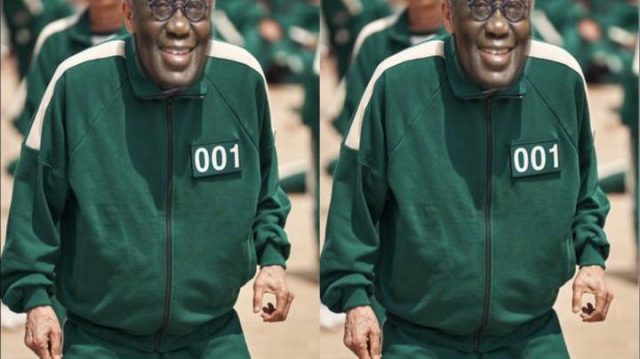 Squid Game, the Korean series, is without a doubt the most popular and trending movie series on Netflix this year. It was a money theft, but with the publication of Squid Game, it has vanished.

Because of the excitement around this film series, everyone wants to see it. It’s a very beautiful film that discusses the power of money. How can money overcome trust, loyalty, and dominate human lives to the point of betraying their blood?

President Akufo-Addo, on the other hand, has been altered to wear the uniform of II-Nam, the first player in the Squid Game.

The individual who edited this photo performed an excellent job with no faults. Squid Game with President Akufo-Addo is a lot of fun.

See the picture below:

Meanwhile, KK Fosu, the well-known highlife musician, has praised the Black Stars management for appointing Milovan Rajevac as the new coach of the national team.

It will be recalled that KK Fosu recently stated unequivocally in an interview that a black man is incapable of coaching the Black Stars.

Charles Akonnor, the previous coach of the Black Stars, was in charge at the time.

In a recent interview with Kastle FM in Cape Coast, KK Fosu reiterated his state…continue reading