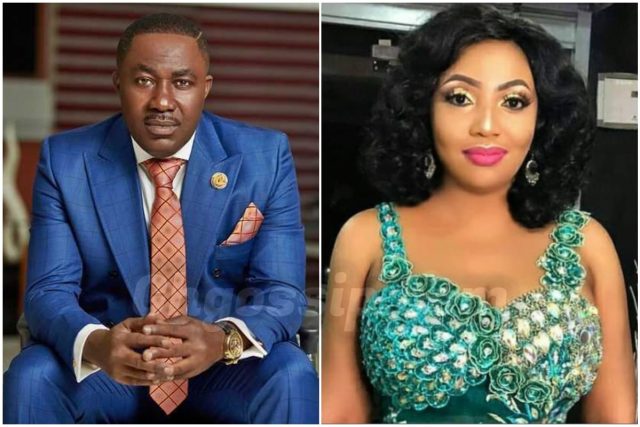 Ghanaians were taken aback after seeing what businesswoman and former musician, Diamond Appiah said in reaction to the glamorous birthday celebration of renowned entrepreneur, Osei Kwame Despite.

Diamond Appiah in a post on her Instagram story, claimed Despite owes her a huge sum of money and has refused to pay and in another post she accused him of robbing young entrepreneurs of their sweat and will be a curse to his generation.

She also asserted that buying a house for someone is not an achievement and this was hours after Osei Kwame Despite donated two houses to his two sisters.

She also asserted that buying a house for someone is not an achievement and this was hours after Osei Kwame Despite donated two houses to his two sisters.

However, according to Tutugyagu, an IG user, Diamond is pained and hating on Despite because he refused to allow her extort money from him.

According to the blogger, Diamond produced a movie and name one of the characters who is a houseboy, Osei Kwame Despite and upon hearing this, the millionaire warned her to remove his name from the movie because of the humiliating elements it comes with and how it would degrade his status and reputation.

Diamond in response told the Despite to pay for the entire cost of the production if he wants his name taken out of the movie which was already due for release but he refused and that was the genesis for her hatred towards the 60-year-old affluent entrepreneur.

“Hi, so I promised y’all I was going to find out the real reason why Diamond claims Dr Osei Kwame Despite owes her some amount of money. I know y’all might have heard it somewhere but let me break it down very well for you to understand it…

So P3t3 Diamond produced a movie and in the movie she named her houseboy ‘Osei Kwame Despite’…So fast forward the trailer of the movie came out, people reported to Despite about the downgrade of his personality in Diamond’s movie..He then ordered his lawyers to caution Diamond Appiah to either change the name in the movie or they won’t allow her to release the movie. Diamond also claimed she had already finished shooting the movie and there’s no way she can go back and do everything again. The back and forth continued till Diamond decided not to release the movie on one condition, and that is if Kwame Despite will pay all the money she spent during the shoot. Kwame Despite refused to pay her, he told her he didn’t send her to use his name in a movie. Diamond took Despite to court but Despite won the case and that’s how come she’s continued to hate Despite over the years. P3t3 Diamond will continue to throw shades at Despite but that will never stop him from being great. Who Jah Bless, No Man Curse…