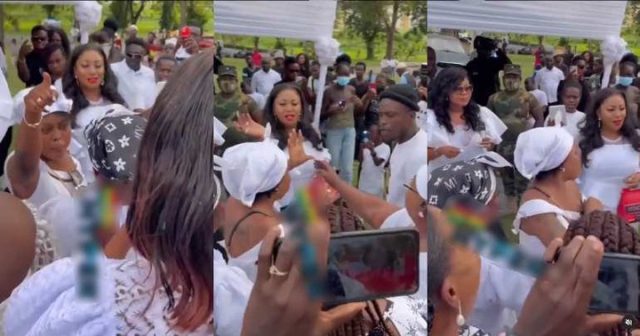 Without Afia Schwar’s drama, the weekend wouldn’t have been complete, and she delivered just what we needed.

Afia Schwarzenneger was caught on film slapping a man in the face with a scorching, nasty slap while attempting to pick up some money that had been splashed on her.

It happened as quickly as lightning, and the guy, who had astonishment written all over his face, was embarrassed for the rest of the day.

This occurred in the KNUST gardens in Kumasi yesterday at a thanksgiving service for Ghanaian comedienne Afia Schwarzenneger’s late father.

Afia was dancing to Gifty Ardoye’s tunes as her wealthy pals Diamond Appiah, Tracey Boakye, and others sprayed 10 cedis notes on her.

A guy emerged from the throng and attempted to pick up or maybe assist her in gathering the money that was strewn across the floor, but Afia mistook him for a robber or worse and slapped him away.

Diamond Appiah and others consoled the guy and requested him to leave the burial grounds, which he did.

Afia was seen confronting another woman and some police officers about the same problem a few seconds later.

After she claimed to have gotten close to 300,000 Ghana cedis from politicians and wealthy members of society, many social media users have labeled her greedy for slapping so many over such a tiny sum.