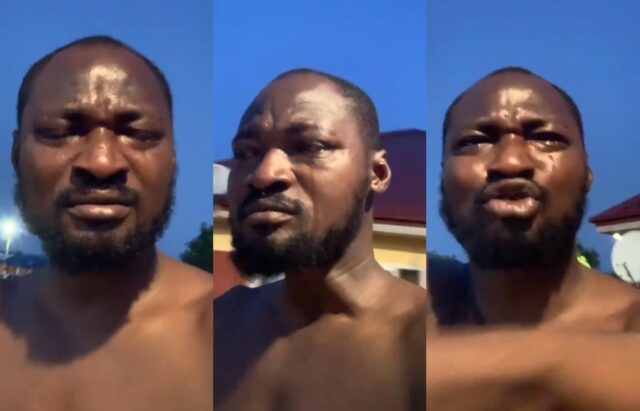 Benson Nana Yaw Oduro Boateng, also known as Funny Face, the Ghanaian comic actor, has confessed that he has been sad as a result of his baby mama’s activities.

Funny Face was in the news a while back after making claims against his baby mother, whom he said had leaked information to some of his colleagues in the entertainment world in order to destroy his career.

Things got to the point where his baby mama, Vanessa, was forced to leave their marital house with their three children because the actor was accused of being aggressive and abusive.

When Funny Face was sentenced to the Accra Psychiatry Hospital by the Ofankor Circuit Court, everything was fine, and he emerged with a new personality.

Well, it appears that things are heating up in the actor’s camp, as he takes to social media to reveal how depressed he has been as a result of his woman’s actions.

Funny Face bemoaned in his article that he has been having difficulties with his relationships with the opposite sex because none of them appear to be working out. His lady, he claims, has not been able to reciprocate the affection he has shown her.

AY3KA depression has finally finished me “ GYE NYAME “ I don’t think I can survive dis one .. 7th depression.. hmmm #[email protected] pls pls pray for me .. dis is too painful .. Aaoo everybody is getting a woman .. yaw Boateng.. go take woman aaah .. you go take cobra … thinking she would love you ? Hmmm dis time revelations Are too much !!! Ryt Infront of ur eyes .. YAW BOATENG choose live and live ooo yooo !!…He wrote.