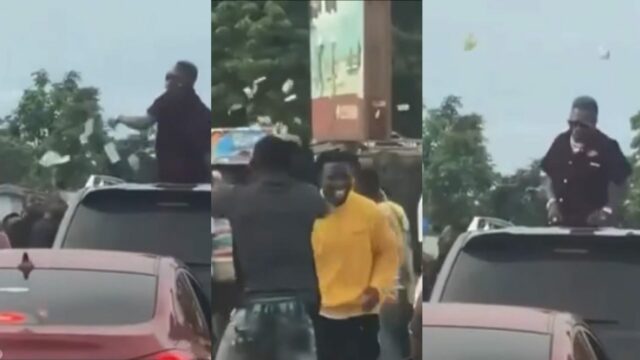 Shatta Wale’s generosity is one of his primary techniques for increasing his popularity in Ghana. Shatta Wale, unlike other singers, manages to bless his followers with presents and money wherever he goes. Some may accuse him of bragging, but I believe this is one of the strategies he employs to win over his devoted fans.

Shatta Wale was seen throwing hundreds of Cedis into a big crowd that welcomed him in Ada in a video he released on his Instagram page.

The video also shows some fans attempting to climb Shatta Wale’s V8 Landcruiser in order to gain access to the money he planned to spray in the crowd.

Shatta Wale claimed in his post that he does not need to be a billionaire to express love to his followers because he is formed by his fans, his fans make his music, and his fans also help to expand the brand.

We are made by the fans
We are shaped by the fans
The fans make the music
The fans grow the brand
We need not be billionaires to show them love when we can. Whatever little we have, could bring a smile. #4lyfis4lyf!
Shouts to the SM massive in Ada! #2muchluv #Paapaapaaapaapaapaa