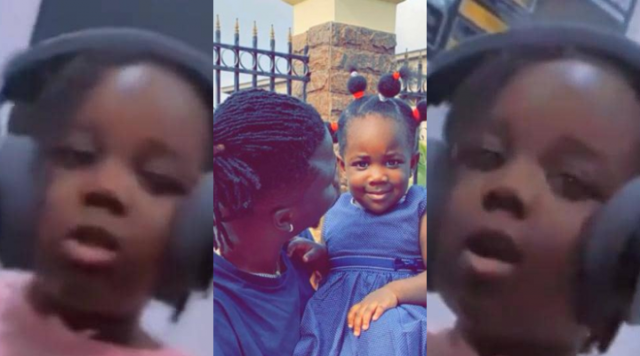 Jidula, the daughter of dancehall great Stonebwoy, is already learning how to hustle by following in her father’s footsteps and going into the studio to do her own thing and drop a banger.

Jidula is a nice child who her parents adore, and this video demonstrates how supportive they are as they attempt to figure out what her interests and passions are by taking her to the studios to do her own thing, which she appears to enjoy.

She was spotted making excellent use of the beat she was given in the studios, and we have a feeling she’ll be dropping a banger for us very soon because she’s been learning from the best (her father) and will make them proud.

The caption on the video warning us that ten years from now, when Jidula is one of Ghana’s top performers, we shouldn’t claim she didn’t hustle since her father is Stonebwoy is all true because we can all see she began studying at a very young age.

We can all agree that if she keeps studying and training like this, she will be one of Ghana’s top musicians in the next ten years if she takes it seriously, and no one can claim it’s because her father is Stonebwoy, but because she learnt from him at an early age.