Home ENTERTAINMENT NEWS “I’m 39, I Can’t Marry You” – Delay Tells Amerado After He... 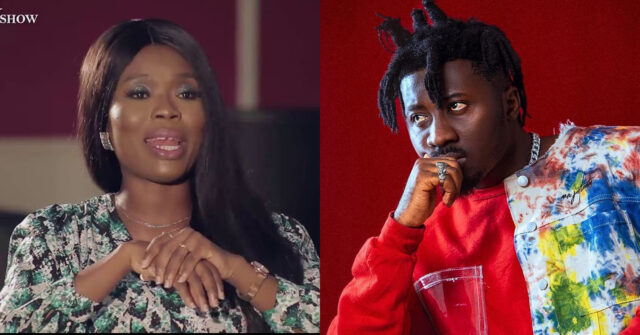 Deloris Frimpong Manso, commonly known as Delay, a notorious television presenter, has warned musician Amerado that he is too young to marry her.

Amerado, a popular Ghanaian rapper, is this week’s “Delay show” guest and has disclosed a lot about himself and his music industry. Although the whole interview has yet to air, the presenter has published a portion of it on her Instagram page.

Delay, who was attempting to get Amerado to open up about his love life, remarked that the rapper should do so so that if his relationship fails, a fan can take his place. In response to her remark, Amerado speculated that Delay might be the one to fall for him.

Delay, the show’s host, told him that he couldn’t marry her since she was 39 years his senior and that he would be worried about her womanizing.