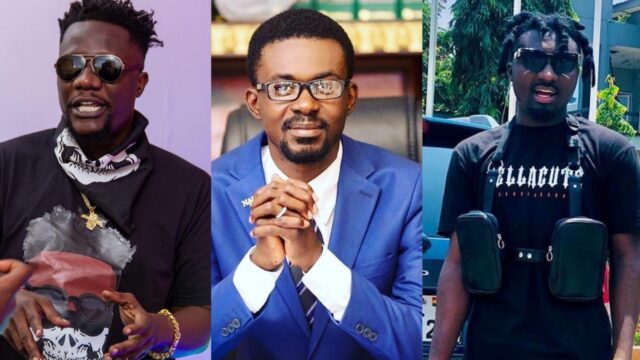 The CEO of Zylofon Music and Menzgold ,Nana Appiah Mensah Aka Nam1 has reacted to the current beef between Obibini and Amerado.

The beef between Amerado and Obibini, has amassed a lot of numbers and attention within this few days.

However, during the interview on TV3, Amerado denied dissing and throwing shots at the Zylofon signee Obinini on Tim Westwood TV. He stated that there’s no way he will waste his time throwing shots at Obinini because he is not up to his standard.

“Do you think I will be on a world platform and be throwing shots at someone I have been working harder than? he quizzed.

His response which did not go well with Obinini, pushed him into the studio to drop a diss track for Amerado titled “Deceased”. Amerado also countered the diss song with “The throne”. In his diss song, he referred to Obinini as NAM1’s puppet.

The arguments and discussion as to who is k.illing who has been on going on several platforms, and Zylofon Media boss Nam1, has decided to add his voice to it.

He made a statement saying, “Heard my son is busy pit patting, punning & peeing on a peasant’s poodle carcass in a puddle. Hold it @obibiniboafo. M7 are you ready for a big concert? Get the #YardieRemixloud and on replay. Bless up @amerado_burner @obibiniboafo”