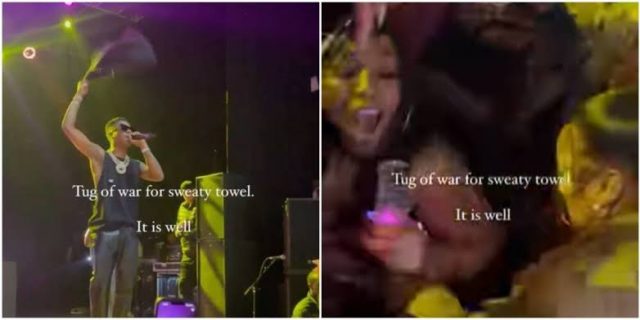 On the internet, a video of two die-hard fans of Wizkid, the Grammy-nominated Nigerian singer, battling over his wet towel at his concert has emerged.

During his Made In Lagos event in the UK, the singer rolled his towel and tossed it into the audience, hoping that one of his lucky Wizkid FC members would grab it and take it home as a gift.

The towel fell in the center of two female admirers who adored him, and a brief skirmish erupted over who had the right to take it home, eliciting a barrage of social media replies.

However, the Popular Nigerian music duo, P-Square, recently reconciled after five years apart, prompting many to demand them to settle their issues.

The twin brothers Peter and Paul Okoye were supposed to be arguing over shady problems, but no one knows for sure why they were fighting, but they lately brought smiles to people’s faces.

ALSO READ:   Dr. Loiusa Receives Wizkid At Her Hospital As He Comes For Dental Treatment